After having worked extensively with MMC/SD cards years ago, I now wanted to take a closer look at the relatively new NM cards, which were created and supported by Huawei.
So get a reader/adapter, open it and analyze the included controller (a Genesys Logic GL3224 in QFN-48) and its connections to the NM-card socket in more detail. The result ... possibly an MMC card in a special form factor.
So connect the

NM-card socket to a µSD adapter, accordingly and in a "normal" microSD reader from ORICO is inserted. And this is where the differences begin ...

As far as I could determine, NM cards work according to eMMC 4.5 or 5.1 specification. Interestingly, I have a card that can be used as an SD card in the std. Reader.
Unfortunately I haven't found an SD/MMC (4bit) USB-reader with which I can read the card registers myself. In the end, however, the following NM-card pinout could still be determined and verified.

Here are the cards I have and tested:

The cards, which are also available as std. MMC work could not be switched to SPI mode (including Lexar). The SAM3SxA_Stick then passes this on as "no media".
One card, which is recognized as SD and also works in SPI mode, has a typical 16GB label in its name according to ScanDriveViewer, but was with "h2testw" in tests inconspicuous over the entire capacity.

There are a few more NM cards with different imprints on the Internet, but unfortunately I could not determine the real manufacturer behind the cards I have. In addition, you can buy large lots of NM cards with self-defined printing via Alibaba - so many visually different cards could contain the same manufacturer.
There seems to be one big difference, which some sellers on AliExpress keep pointing out, which would coincide with the one "NM -> SDXC" card available to me: 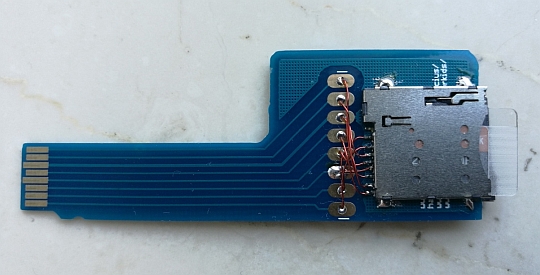